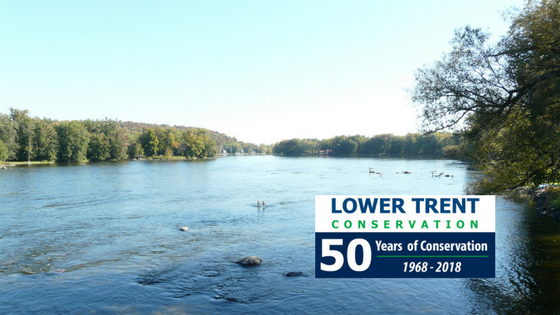 The Warkworth dam was officially opened on September 13, 1972 with much pomp and ceremony before a crowd of 600. Located in the Village of Warkworth on Mill Creek, the reconstruction of the dam and spillway was the first water management project for Lower Trent Conservation.

It is believed that a dam was in operation on the site before 1840, providing a source of power for saw and grist mills. After installing a diesel motor to operate its mill, Warkworth Co-operative Services sold the land surrounding the mill pond to the Township of Percy (now part of the Municipality of Trent Hills) in 1967 who in turn donated the property to Lower Trent Conservation in 1971.

To ensure the dam could be safely maintained, a preliminary engineering and feasibility study was conducted on the dam for the municipality in 1966. The job of repairing and reconstructing the earth dam and concrete spillways was subsequently turned over to the newly formed Conservation Authority. Construction began in 1971 and was completed in 1972.

In the spring of 1980, the dam was overtopped and the Village of Warkworth experienced severe flooding. A concrete floodwall downstream of the dam was constructed in 1982 to help protect against future flooding. The floodwall expanded the conveyance capacity of the channel, reduced ice jamming, and removed 50 homes from the 100 year flood hazard.

Each fall, stoplogs are removed from the dam to help reduce ice buildup over the winter, and ice jamming and flooding in downstream areas of the Village during the spring runoff. Stoplogs are replaced in the spring once high springtime flows have passed.

John R. Rhodes, MPP and Parliamentary Assistant to the Minister of Natural Resources, provided the following comments at the official opening in 1972:

“This official opening of the Warkworth Dam and Reservoir is a ceremony of great pride to the members of the Lower Trent Region Conservation Authority, as it is another first for that body. This opening today signifies the first of what the authority hopes will be many, in the years to come.

After formation in 1968, the authority progressed rapidly, with projects started on many fronts. A great deal of activity occurred in all of the authority’s five advisory boards. Today we witness the completion of one of these projects.”