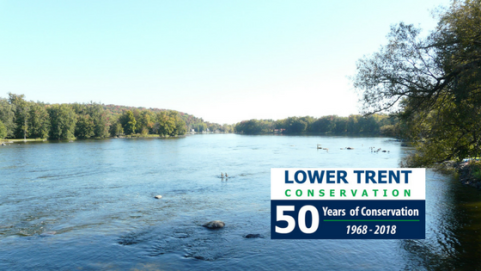 For an organization that has grown from one employee in 1970 to 22 employees in 2018, it makes sense that the location from where the conservation program was directed would need to grow and adapt through the years.

In 1968, Lower Trent Conservation’s first and only employee, Bill Lawson, worked out of the back of his house in Trenton where he kept financial books for a number of small businesses. In 1971, the Conservation Authority moved to Campbellford, as it needed more space for both files and employees. This office ‘left much to be desired because of the intense heat in the summer’ and the rapidly growing Conservation Authority quickly outgrew the space. So, in 1972, the three employees took up residence in the back of the municipal building in Frankford.

By the mid 1970’s, the conservation staff now included nine full time staff with an additional 65 people working out of the office in the summer months. After taking some time to consider a location at Proctor Park Conservation Area in Brighton, it was decided to build a new office along the Trent River waterfront in Trenton, close to financial and other business services. Described as an ‘ultra-modern building boasting many interesting and modern features of construction’, the office was officially opened in November 1978. The building included a reception area, five offices, an open space drafting area, and boardroom. By this time, the staff team consisted of 11 people.

After 26 years at 441 Front Street in Trenton, Lower Trent Conservation moved its administrative office to the former Murray Ward office located between Trenton and Wooler just off County Road 40 (Wooler Road). With 14 staff and 26 years’ worth of files, this latest office location at 714 Murray Street offered a more spacious setting with much needed storage and archive space. We’re still here and hopefully the office will serve us well for years to come.