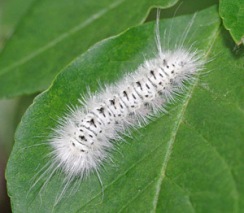 It’ been a big year for the Hickory Tussock Moth caterpillar. Higher-than-usual numbers of the fluffy white larvae with black markings have gained notoriety this summer as they have frequently been spotted in parks, yards and other naturalized areas.

The Hickory Tussock Moth is a species of Tiger moth that is native to Ontario. Larvae (caterpillars) are fuzzy in appearance – covered in long, hair-like setae arranged in tufts which is why it is called a ‘tussock’ moth. Most hairs are white, but there are black tufts along the middle of the back, and four long black hair pencils, two near the front, and two near the back. The colouring of the Hickory Tussock moth is distinctly aposematic – meaning that its colours serve to warn of danger if disturbed. The term aposematic comes from the Greek work “apo” meaning away, and “sema” meaning sign. This is nature’s way of telling us to leave it alone!

Hickory Tussock moth caterpillars resemble their Tiger Moth relatives the Woolly Bear caterpillar (Pyrrharctia Isabella) but unlike the Woolly Bear, whose fuzz is harmless, the Hickory Tussock moth’s hair-like setae cause itchy rashes in humans. The four black pencil-like barbs on the ends are connected to poison glands which inject a venom on contact. The venom typically causes a red, burning rash and the hairs can cause a reaction similar to that which occurs from touching stinging nettle (Urtica dioica) plants. The rash subsides within a day or so. Some people are allergic to the venom and can experience more severe reactions which should be treated by a doctor. 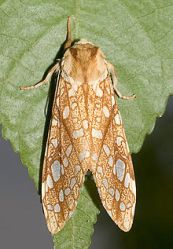 In the larval stage, Hickory Tussock moths are active in the daytime and are found in and near deciduous woods. The caterpillars primarily feed on the leaves of nut trees, such as hickory and walnut, but they will also eat a variety of other tree leaves such as ash, oak, willow, apple and elm. The defoliation caused by leaf feeding is natural and does not cause mortality to host trees. In the early stages of larval growth, tree leaves are left “skeletonized” by groups of about 100 feeding larvae. As the caterpillars grow older they become more solitary and eventually pupate (cocoon). Adult Hickory Tussock moths have peppery cream-coloured forewings boldly marked with irregular bands of semi-translucent spots between brown veins. The body (thorax) of the moth has thick brown lateral stripes.

Children and pets should be kept away from Hickory Tussock moth caterpillars, as inhaling the hairs or transferring them from the hands to the eyes (or paws to snout) can cause painful reactions. Most symptoms are similar to bee stings and can be cared for similarly by washing the affected area with soap and water, taking an antihistamine, or applying a calming lotion such as calamine to help alleviate minor symptoms fairly quickly. The best way to handle them is to use gloves or a piece of cardboard and a stick to move the caterpillar away from little hands.